HomeSaver, a Hardest Hit Fund (“HHF”) Initiative, is a federally-funded program. In September 2010, DCHFA was awarded over $20 million to help homeowners prevent foreclosures in the District of Columbia.  The Agency has assisted nearly 700 households and 95 percent of homeowners keep their homes 24 months after receiving assistance.  This achievement earned the Agency the distinction of having the second-highest rate of allocation nationwide among HHF program administrators.

Building on the success of this initiative, DCHFA worked with the U.S. Department of the Treasury and the District of Columbia Office of Tax and Revenue to create the HomeSaver Phase II-Tax Lien Extinguishment Program. The program provides one-time assistance to eligible District of Columbia homeowners at risk of foreclosure due to delinquent real property taxes.

Bonita Mims discovered HomeSaver in 2013 as her unemployment benefits ran out and she found herself unable to pay the mortgage for the first time on a house that has been in her family for five decades.

“My aunt first purchased the property back in the 1960s,” said Mims. “When I came here to go to school at Howard, I would visit as a student. I love the location and it was always a dream of mine to buy the house from my aunt.”

Mims — who took over the home in 2001 after her aunt passed away and spent years renovating it — didn’t want to lose the house her aunt had worked so hard to buy. But after being turned down for assistance from her credit union, she was unsure of how she could keep it.

Mims found HomeSaver online through the city’s employment services website. “I couldn’t believe this existed,” she recalled. “I immediately filled out an application. The last thing I wanted to do was sell my house … This program truly was a lifesaver for me.”

“It gave me a little breathing room to pay my taxes in September,” Mims said. “There’s no way I would still have my house without this program.” 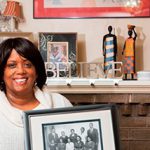